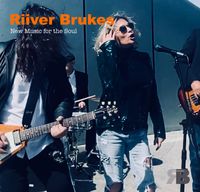 Riiver Brukes’ unusual gritty and soulful voice brings a powerful edge to some amazing hook laden songs, and is influenced by a broad spectrum of genres and artists, but especially her passion for jazz and blues. Rising through a foundation built from various bands including pop band Cicero (#11 European Dance Charts), Edinburgh’s very own Riiver Brukes releases her first solo album, ‘Reformed Soul’ (co-written and produced by Joe Segreti: Bruno Pelletier, Mooch): An album that oozes nothing less than the attitude, character and soul of this Scottish Lassie.

‘Blue Monday’: We cannot force someone to love us more or less - and there is no sincerity in staying 'just because...'. You will only waste more of your precious time - and theirs. Respect and love is a two way street. If you are going no where down a one way street, then perhaps it is time to try a new route...

‘This song was inspired by an elderly couple walking through my local village. They were desperately trying to hold each other's hand as the old woman struggled to push the frail man in his wheelchair. Clearly unable or unwilling to lose sight of each other - even for a moment. It was perhaps the most beautiful and yet, the most sad thing to witness: Uncertainty, love, vulnerability and precious time - all rolled into a few brief seconds. I knew that they didn’t have much time left together… but then again, I wondered what rich history they had shared…’

Break the Chains is a song about equality and rights for all human beings. We should never lose sight of that. The color of a person’s skin is irrelevant as is their place of origin, their personal beliefs, or anything else. What really matters is what is in their heart and their actions toward others. And that is why we must break the chains that divide us.